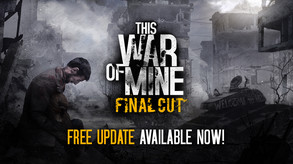 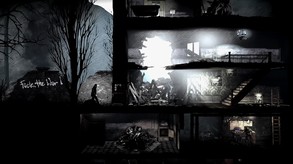 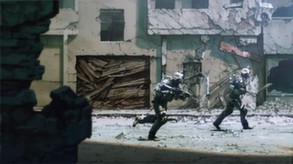 This War of Mine

$11.15
In This War Of Mine you do not play as an elite soldier, rather a group of civilians trying to survive in a besieged city; struggling with lack of food, medicine and constant danger from snipers and hostile scavengers. The game provides an experience of war seen from an entirely new angle.
Categories: Adventure, Indie, Simulation
Tags: 2.5D, 2D, Adventure, Atmospheric, Choices Matter, Crafting, Difficult, Indie, Open World, Platformer, Point & Click, Post-apocalyptic, Rogue-like, Side Scroller, Simulation, Singleplayer, Stealth, Strategy, Survival, War
Platform

The pace of This War of Mine is imposed by the day and night cycle. During the day snipers outside stop you from leaving your refuge, so you need to focus on maintaining your hideout: crafting, trading and taking care of your survivors. At night, take one of your civilians on a mission to scavenge through a set of unique locations for items that will help you stay alive.

Make life-and-death decisions driven by your conscience. Try to protect everybody from your shelter or sacrifice some of them for longer-term survival. During war, there are no good or bad decisions; there is only survival. The sooner you realize that, the better.

This War of Mine: Anniversary Edition

It’s been two years since This War of Mine global release and we’re still expanding the experience. This new free DLC, created especially for the Anniversary Edition, adds new characters, new locations to explore, and most importantly – a whole new ending, leading to a different outcome to the game. The dilemma though remains the same – how far will you go, to protect the ones you care about?

This War of Mine:

Babel project is a community-based translation initiative that will allow us to bring This War of Mine experience to people all around the world.

Thanks to Babel these new languages are already available in game:

"This War of Mine is a gripping survival sim, and a great study of survival during wartime and civil collapse."
8.4 - IGN UK

"This War of Mine shows the horrors of war in a way, that we rarely can experience in a game."
9 - Giga Games

"Is this a game you want to play? No. Is it a game anyone with a beating heart should play? Yes. A million times yes. It's a longform exercise in empathy, a sobering piece of work that fills in the blanks left when all we see of war are the headshots. It's a much-needed course correct in the current shoot-first-ask-questions-never gaming landscape that supposes war is won because one supreme badguy caught a bullet through his brainstem. No: It's won when the people who lived under his boot get to go home."
8 - Gamespot
© 2014 11 bit studios S.A. This War of Mine™, 11 bit studios™ and respective logos are trademarks of 11 bit studios S.A. All rights reserved.
-80%
Sudeki
1