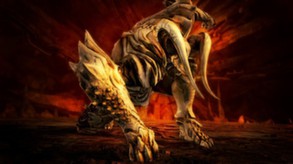 The world’s alliance with the heavens has been threatened by a dark and malevolent force – the mysterious Lords of Shadow. Across this shattered land, the souls of the dead wander unable to find peace, whilst creatures of evil wreak chaos and death upon the living.

Gabriel Belmont is a member of the Brotherhood of Light, an elite group of holy knights who protect and defend the innocent against the supernatural. His beloved wife was brutally murdered by the evil forces of darkness and her soul trapped for eternity. Neither living nor dead she realizes the horrific truth of what is at stake and guides Gabriel to his destiny and hopefully salvation for the world.

Reverie marks a return to the game’s climactic castle setting as Gabriel seeks to assist the recently-slain vampire Queen’s hand maiden. The download spans three stages, and offers a breath-taking twist to the game’s plot

Resurrection, which itself follows on from the completed Reverie, lays bare the fate of both Gabriel and the Belmont clan. Gabriel must battle an evil demon known only as ‘The Forgotten One’ that has broken loose of its ancient chains.

These new DLC levels provides a stunning finale to KONAMI’s epic tale of death, betrayal and redemption – with ‘The Forgotten One’ intent on destroying mankind, and only Gabriel standing between it and its goal…

© 2013 KONAMI Digital Entertainment. "Castlevania" and "Lords of Shadow" are trademarks or registered trademarks of Konami Digital Entertainment Co., Ltd. KONAMI is a registered trademark of KONAMI CORPORATION. Uses Bink Video. Copyright © 1997-2013 by RAD Game Tools Inc. FMOD sound and music system, copyright © Firelight Technologies, Pty Ltd. 1994- 2013. Lua 5.1 Copyright © 1994-2013 Lua.org, PUC-Rio. PhysX™ is a trademark of NVIDIA Corporation and it is used under license. All other copyrights or trademarks are the property of their respective owners and are being used under license. Created and developed by MercurySteam Entertainment s.l. and published by KONAMI. Unauthorised copying, adaptation, rental, lending, re-sale, arcade use, charging for use, broadcast, cable transmission, public performance, distribution or extraction of this product or any trademark or copyright work that forms part of this product is prohibited.
-56%
LEGO Jurassic World
1